Mi-Fi, ever heard of it? It’s a LTE/Wi-Fi router combo that fits inside your pocket. Smaller and lighter than a cellphone, but able to bring you and the people around you hasslefree internet on the move.

I think of myself as being quite informed when it comes to technology and especially connectivity, but when D-Link asked if we wanted to review some "Mi-Fi Products" - I had to first Google the term.

Mi-Fi, as per definition, is in its basic form a device that acts like a hotspot and it has a focus on being portable. The name Mi-Fi refers to "My Wi-Fi" according to some sources. 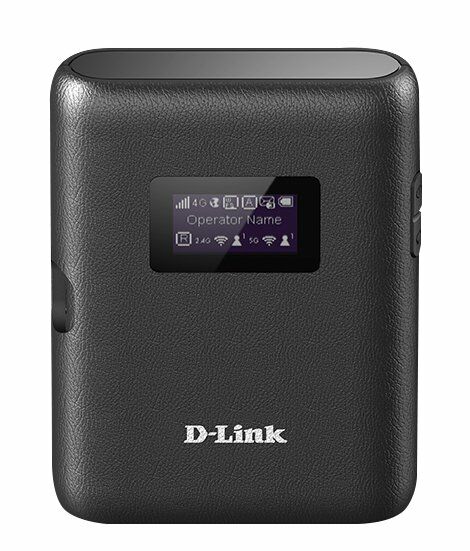 Better Than My Phone’s Hotspot ?

Your phone has somewhat similar capabilities if it has a hotspot option.

The Mi-Fi device on the other hand is a dedicated device with a much bigger battery and you are bypassing the usually more expensive "mobile LTE data" one usually gets with your phone data package.

I love dedicated devices, it reminds me of the core tenant of Unix/Linux software philosophy:

"Do one thing and do it well"

If this is a bit out of your frame of reference, think about a Kindle vs Tablet, both let you read books in bed or on the aeroplane, but with the Kindle the reading experience is laser focussed and optimized for battery life and eye strain etc.

Having a dedicated device for your internet connectivity when you're out and about or traveling certainly has its benefits, for one you save your phone's battery and the Mi-Fi device is definitely better at handling multiple devices (ie friends connecting).

Once setup it is as simple as switching on that toaster or Kindle, you press a button: now you have an excellent hotspot that is not your phone.

When my girlfriend and I go traveling or little breakaways with our dogs (yes, they go with) our first question we usually ask is: will there be internet available ?

Even though some of the getaways provide the internet it’s seldom optimal and between her phone (Vodacom) and my phone (Mtn) we usually end up using one of our phones as a hotspot for the weekend. Thus somebody's phone is usually on the charger 24/7 - a Mi-Fi device will solve this completely.

The reader should also distinguish between "normal phone data or airtime" and the now commonplace "Fixed LTE packages" - the latter are also LTE/4G, but usually a little bit cheaper than your phone’s data package.

The term fixed refers to the SIM-Card and contract details of the package where once the SIM locks onto the nearest tower you are now fixed to that tower and it can take up to 24 hours to lock onto a new cellphone tower , when you travel to a new place.

One should also be aware that the ISPs have different policies as to how often and how many times you can "move" or "change" your location for your "Fixed LTE" package.

With MTN for example, you can only request for your service to be moved to another location (tower) once a year.

LTE Internet vs Wi-Fi vs "My Router"

Just so that we are all on the same page, I’m going to throw some definitions and jargon your way, which will be used in this review:

A wireless connection standard with the end result of providing you with wireless internet via cell phone towers. You can think of LTE as a means of bringing internet from the cell phone network to your phone or Mi-Fi device via radio waves (wireless).

Now compared with fibre or ADSL the means of bringing the internet to your house is via physical cable in the ground.

Somehow over the years Wi-Fi has become synonymous with the internet, but technically this is not correct.

Wi-Fi is the "technology" for distributing the internet (or other networks) wirelessly inside your house or office. It’s not intended to bring the internet to you across great distances; for that you need fibre, LTE or ADSL.

Thus when you are looking for Wi-Fi internet deals, you are in fact looking for "LTE deals".

Well "I bought the internet, what now ?" I hear you say while pointing to your Wi-Fi router…

Your Wi-Fi router (the box with 3-4 antennas) is (as mentioned above) the device that distributes your connection (LTE, Fibre, ADSL) inside your house via Wi-Fi specification.

You will still need some sort of "source of the internet" to plug into "your router".

So one can say that a Mi-Fi device has two parts:

D-Link sent us their Mi-Fi device the DWR-933 for testing and we have been using it together with our Telkom LTE package from WebAfrica, so far no complaints and we are happy campers.

The D-Link Mi-Fi DWR-933 is very cute and small. It is smaller than a phone and, I’m pretty sure, it can fit inside a cigarette box if you are so inclined for a visual reference of scale.

There are two small buttons on the side for "power" and "display" respectively, and on the opposite side, a USB port for charging.

The construction is of a high grade plastic and there is a small screen to show you a plethora of information which includes: 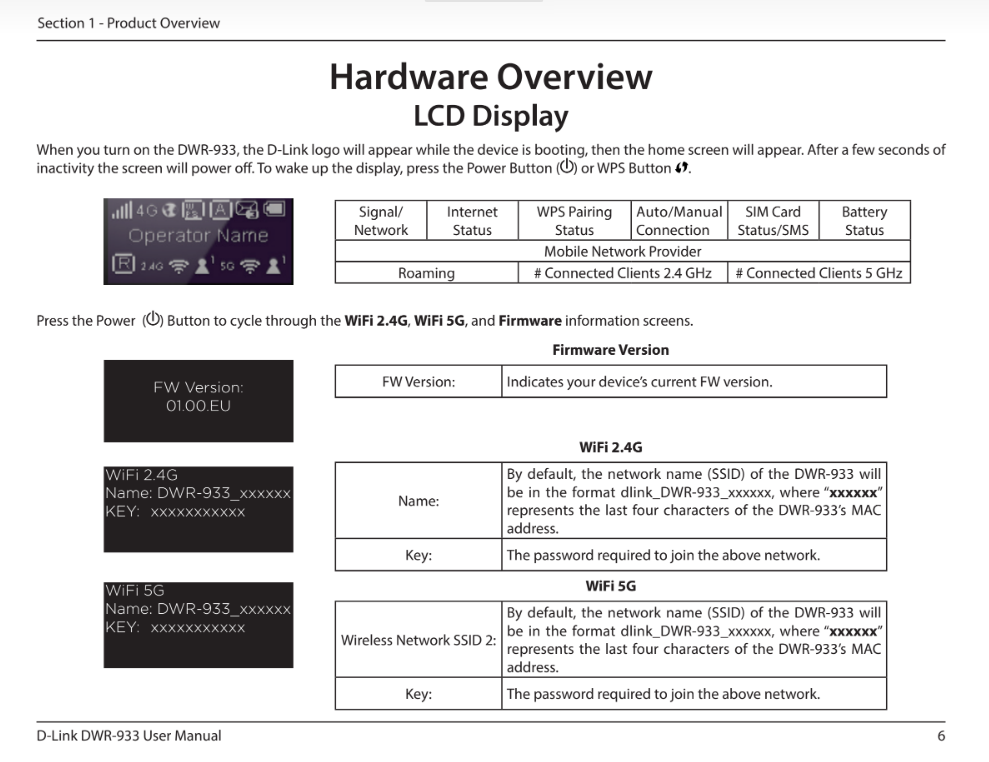 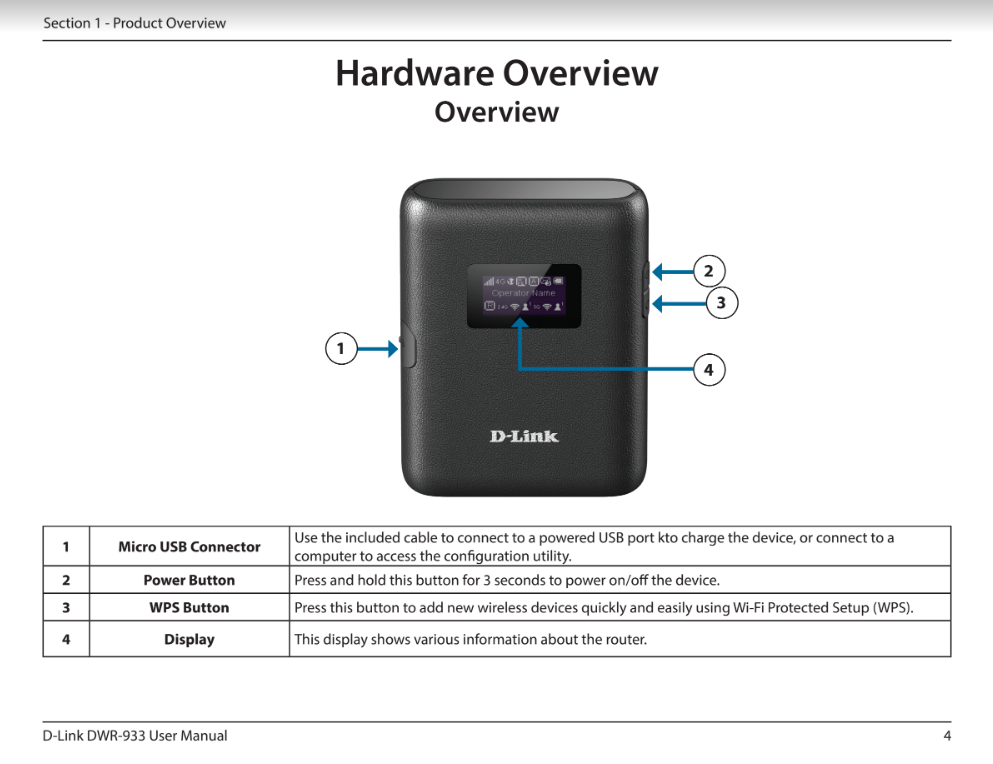 If I had a criticism of the device it would be this: As with most phones, it's a very delicate operation of guessing, pulling and knife-tip wielding to get the SIM-Cradle open and figuring out which way the SIM card should go.

Note to manufacturers: There is no such thing as too big or too much text and graphics to help the user to insert a SIM card. 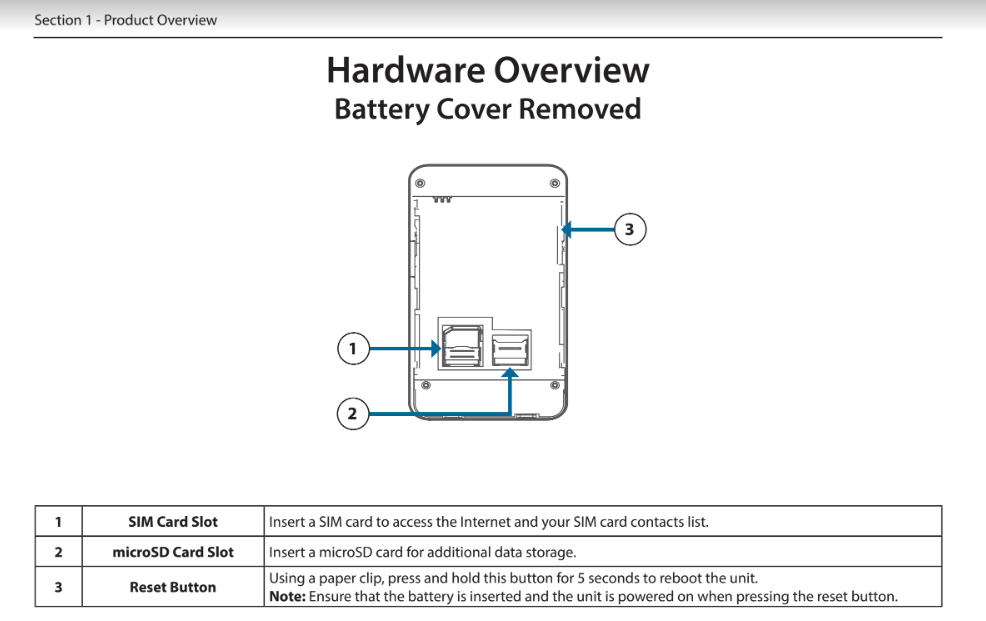 This little gem is a dual band router, meaning you can have two separate Wi-Fi networks. One in the 2.4Ghz space and one in the newer and less crowded 5Ghz space.

You can disable one or the other and personally, I think if you only enable the 2.4Ghz you would save some extra battery juice just by running the one lesser power-hungry hotspot i.e 5Ghz

There is a big removable battery of 3000 mAh inside, and charging is done via USB.

This big battery is definitely going to give you days of internet connectivity if you manage it correctly.

The device can be set up with a custom sleep interval, for example when no clients are connected or making use of it. A simple press on the power button will wake up the device once more.

For reference the iPhone 10 battery is 2700 mAh, but it needs to use that capacity to handle the rest of your phone as well. With the D-Link DWR 933 the whole 3000 mAh is dedicated to bringing the internet to you and providing a hotspot.

We ran the hotspot for just over a full day, with two devices connected, before we needed to recharge it again.

Well that was the easy part:

After I managed to open and insert my Telkom LTE SIM card (not as easy as it sounds), there was virtually no further setup required. It took about 10 seconds and the screen flashed "Telkom" and the Wi-Fi network became available. What is very handy is that the current Wi-Fi password is also displayed on the screen. Making it easy to share with others, or connect yourself, without having to fumble for the information.

Once you are connected you can also access the admin interface via your browser on http://192.168.01, the default login details are "admin" and no password, this should be the first thing you change !

It’s a very clean and elegant looking interface where you are able to fine-tune your setup: such as changing passwords or switching networks on or off, for example. You can also manage the firmware upgrades from this interface as well. 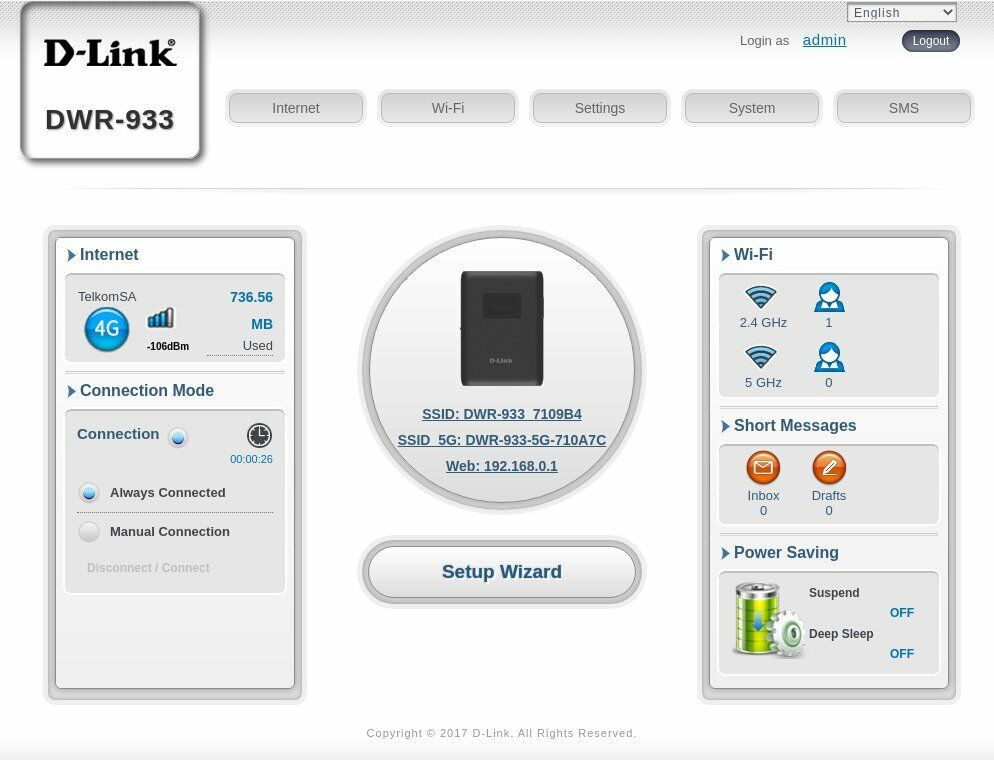 Notice the built-in data-counter under the "Internet" heading to the left, very handy ! 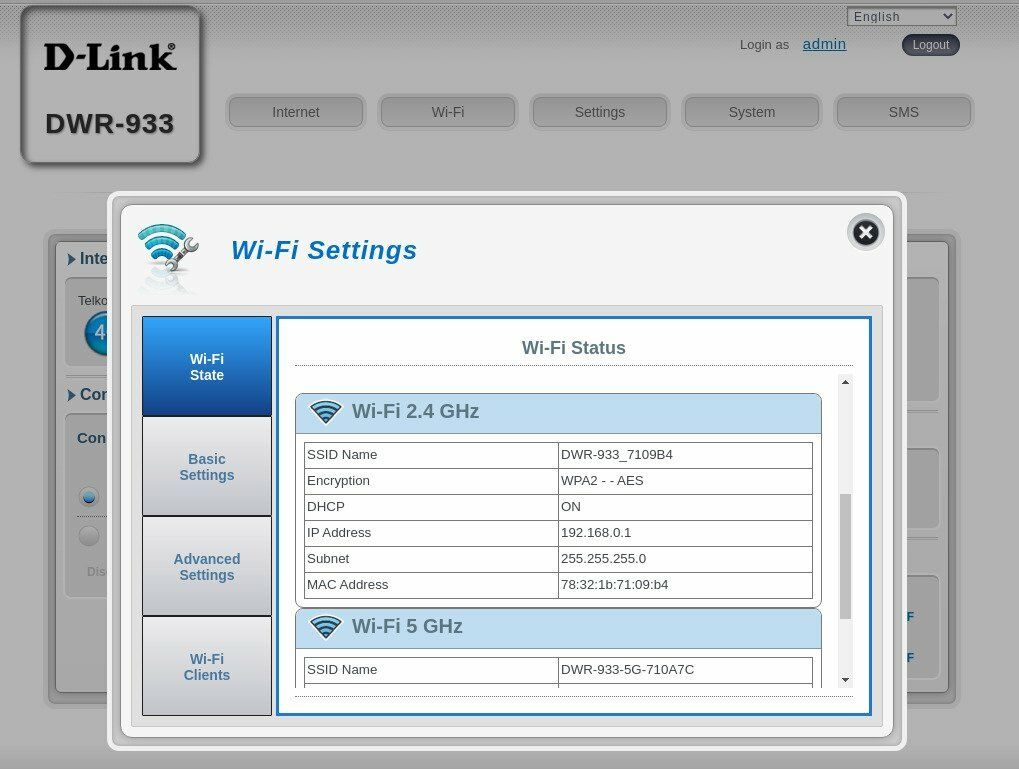 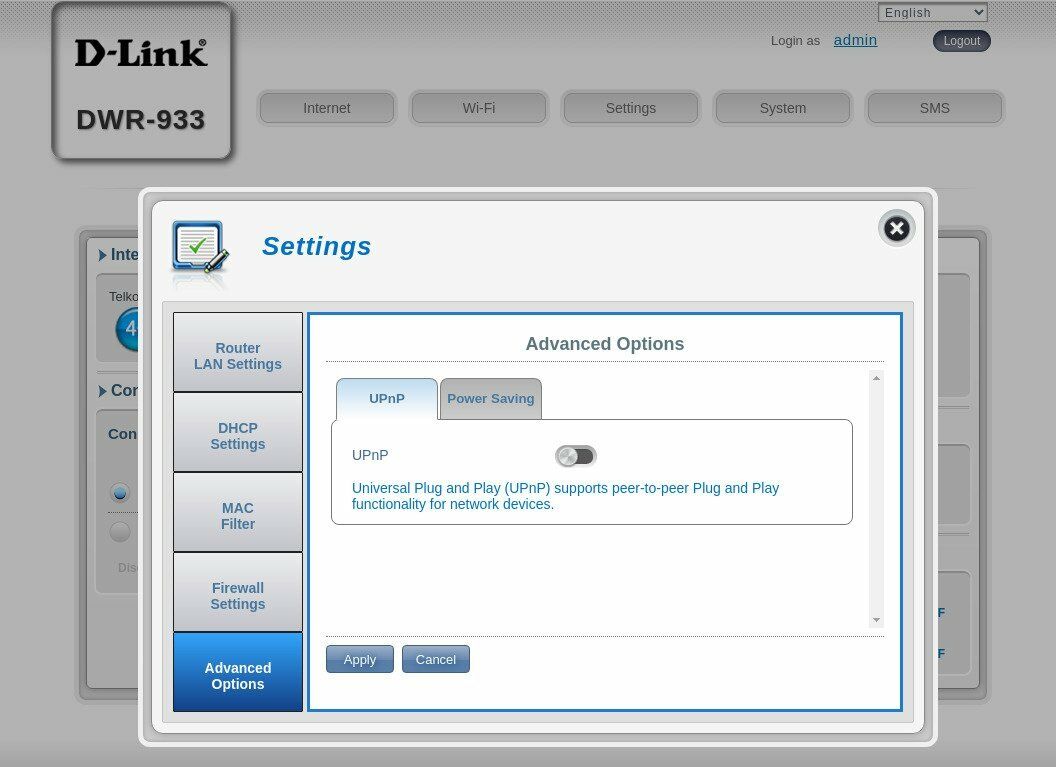 The theoretical top speed limit of the device is 300 Mbps! Now if only we could get a LTE provider in South Africa that can deliver those service levels...

We executed some internet speed tests, but we should make it clear: the speed here has more to do with your internet service provider, (in this case Telkom), than with the Mi-Fi device.

We got around 30Mbps which is on par with what we got with our HUAWEI B52 LTE router.

Through the home office we managed a stable Wi-Fi connection even when we were upstairs and the device was downstairs.

The DWR-933 supports up to 10 simultaneous clients.

It is worth noting that Amazon UK users have given the device a 4.5 star rating from over 2,500 user reviews!

The important bits here are that it is a dual band router (2.4Ghz and 5Ghz) and supports LTE A as a connection source and comes with a huge battery.

You wouldn’t think it, but this little device has a built-in firewall, MAC filtering and port forwarding capabilities (should you need to forward that game-server traffic to your PC rig).

This is a surprising hardware feature, and the MicroSD card can be used as extra SMS storage space.

If you're the sort of person that has a GoPro in their pocket and are itching to go away for a work-weekend, the D-Link DWR-933 should definitely be part of your "tech-travel-box".

Just be sure to double check your LTE package and the providers policies on changing location.

It turns the guessing and frustration of setting up a stable internet connection for one or more persons in an unfamiliar environment into an easy "just power it on" solution.