What Lies in the Abyss of the Internet

We've all heard of the Dark Web - that place where the bad things happen and mostly illicit and very underground trade takes place, but the web is a really, really, really big place. Deep in its underbelly you will find a place called Mariana's Web. Ever heard of that? We didn't think so.

Mariana's Web is named after the Mariana's Trench which is the deepest oceanic trench on Earth with a depth of approximately 11.3 Km. A largely unexplored area, and so a fitting name for the deepest part of the web.

Surface Web vs What Lies Beneath

There is a lot more to the Internet than Facebook, Google, YouTube, TikTok and websites you visit on a daily basis. This is literally just the surface access of how big the web is and is considered only about 4% of the information on the internet.

To access the deeper layers is not as easy as Googling it. There are also not just two layers to the internet, but multiples!

We only access the first layer in our daily lives (the Surface Web). After this layer comes, Bergie web (nothing to do with the homeless guy on the street corner, but most web developers access this layer in their daily jobs), Deep web (where things get interesting and is the territory of beginner hackers), Charter web (where things get ugly - and contains what we refer to as the Dark web) and then Mariana's web. Even after Marianas web there are three other layers namely: Level 6, The Fog/Virus Soup and the Primarch System. Accessing these last layers are reserved for the ultra brave, as it may pose some risk to your own life mostly because of the types of information floating around here (think human trafficking and drug lords). The last layer is as mysterious as the Matrix. For our purposes, you may think of it as the Matrix 3 movie and you require Neo type awakened skills (plus Max Plank level of genius - he was credited with the birth of quantum theory) to access this level.

What is Mariana's Web?

The Mariana's Web is darker, deeper, and more dangerous than the deep web. It may sound like a myth but no it's not, it exists. It is believed that this part of the web contains the secrets of powerful government (and other) agencies. The most disturbing website on the internet can also be found here (aka “Iceberg”). Some say that the Mariana's web also hosts secret data of government agencies.

There's no proof what this part of the internet actually contains and there are many rumors floating about.

Unfortunately this level of geek is way beyond my brain to grasp. You need to solve a quantum level equation to gain access. No jokes.

??Unlike the deep web you can't use Tor (short for The Onion Routing project). Tor is an open-source privacy network that enables anonymous web browsing through using multiple layers (like an onion) in simple terms. Accessing Mariana Web is a lot more complicated than that. According to the rumor you must calculate the complex algorithm termed the Polymeric Falcighol Derivation. There is some doubt that this algorithm is actually real. Further, while solving it you may be stuck with the impossible task of computing something that does not exist. 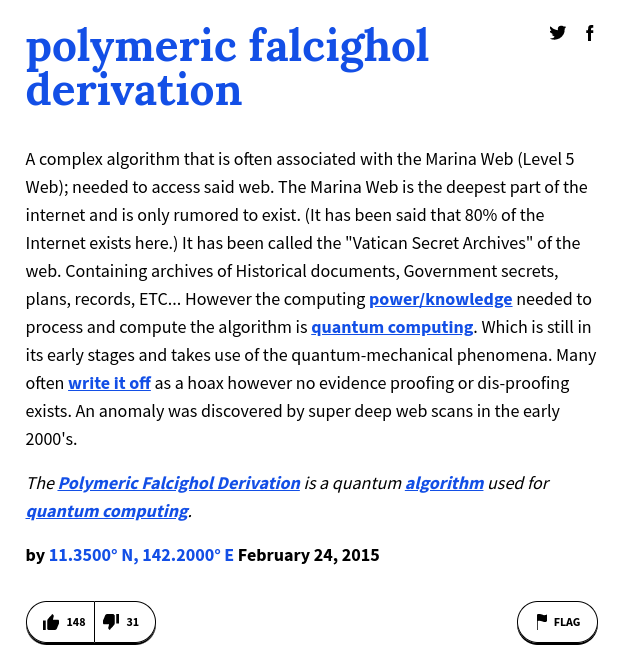 And now you know that what you thought was a big place, is only a small fraction of what is really out there!