It was a sad day in January 2021 when Musica announced their company closure.

The memories came flooding back of my teen days. Standing in the shop looking through CD covers, finding one you like and going to the listening station to give it a spin before you purchased it (or not). Those were the days...

To be quite honest, I had absolutely no idea that Musica was even still in existence until I saw that headline. Who still used it? Hadn't we all switched to digital music and streaming services?

I recall a few years ago that my dad asked me to make him a CD of some of his favourite classical composers. Unfortunately, since I work on a Mac, that was a total no-go. Trying to convince him to use a streaming service was met with equal exasperation from him though, but using streaming services whether to watch TV or listen to music is second nature to most of our and subsequent generations.

These are some of our favourites: 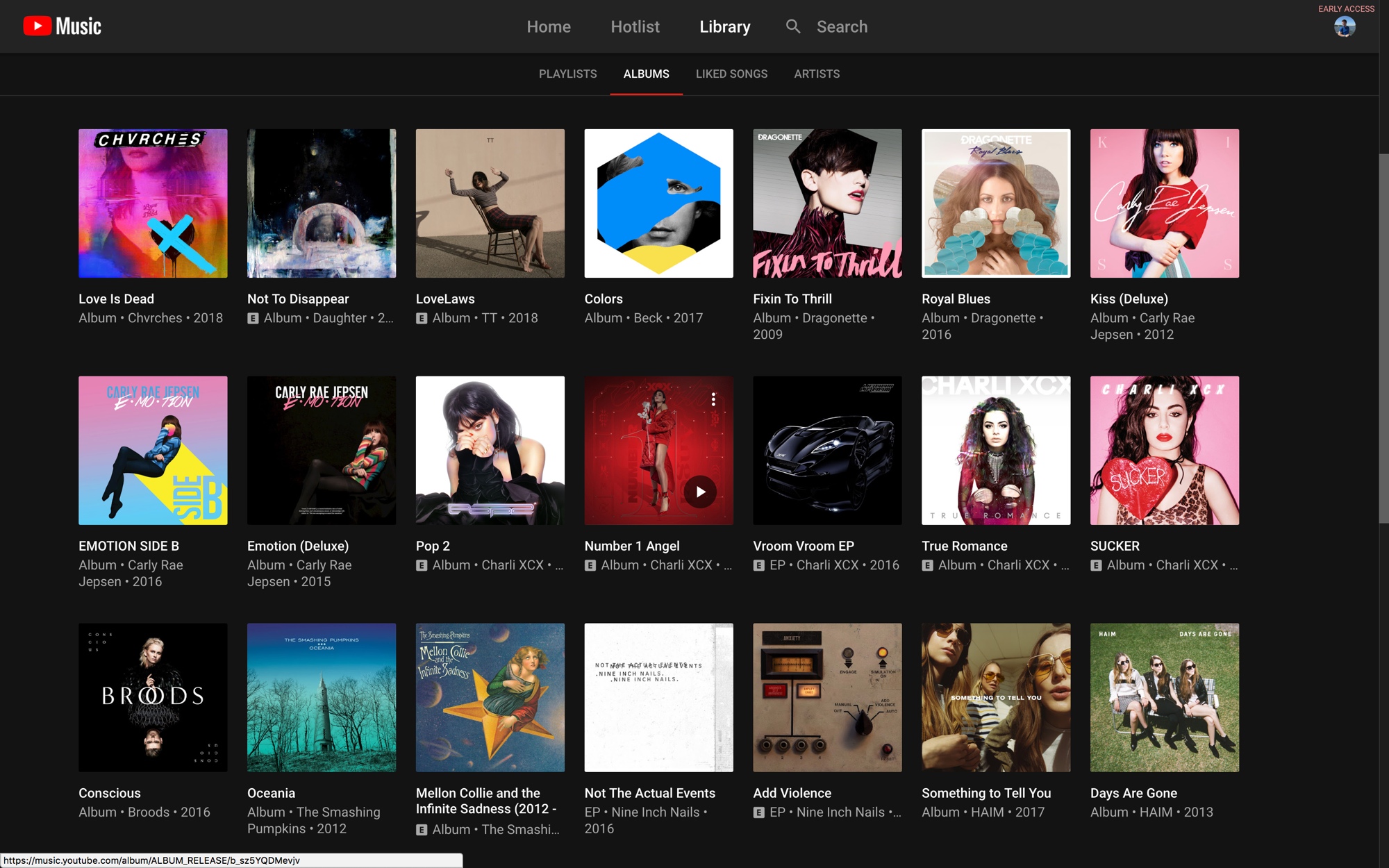 YouTube was one of the earliest places that made the transition easier as you could also watch the music video for the song at the same time. Groundbreaking at the time! Especially for South Africa where previously we would need to wait for the "Zero Hour Zone" on late-night TV (midnight to be exact) to watch the latest music videos.

Launched circa 2005 the service hasn't changed that much from its original offering, except for the ads that accompanied everything you watch (unless you have premium). And of course lately YouTube also tries to push YouTube music on you. Why? Why would you sign-up to YouTube music when you can watch and listen for free on normal YouTube?

Range: It's pretty hard not to find something on YouTube, but you have to dig to find the "official" music videos. There are so many "fan created" videos of songs or tributes to bands/songs that it takes a min or two to find what you want.

I do still enjoy finding something I feel like listening to and playing it on my TV and watching music videos in the background while working or doing house chores. It was also really cool when Google Chromecast came out that you could create a jukebox effect with multiple people logging on to your wifi and casting what they want to listen to.

With its popularity it was only a matter of time that it would evolve into hosting advertising too. So the biggest difference between YouTube and YouTube Premium is that you pay not to have any ad breaks on the Premium version.

Offering is available both on desktop and mobile, and for download to listen offline for Premium subscribers. 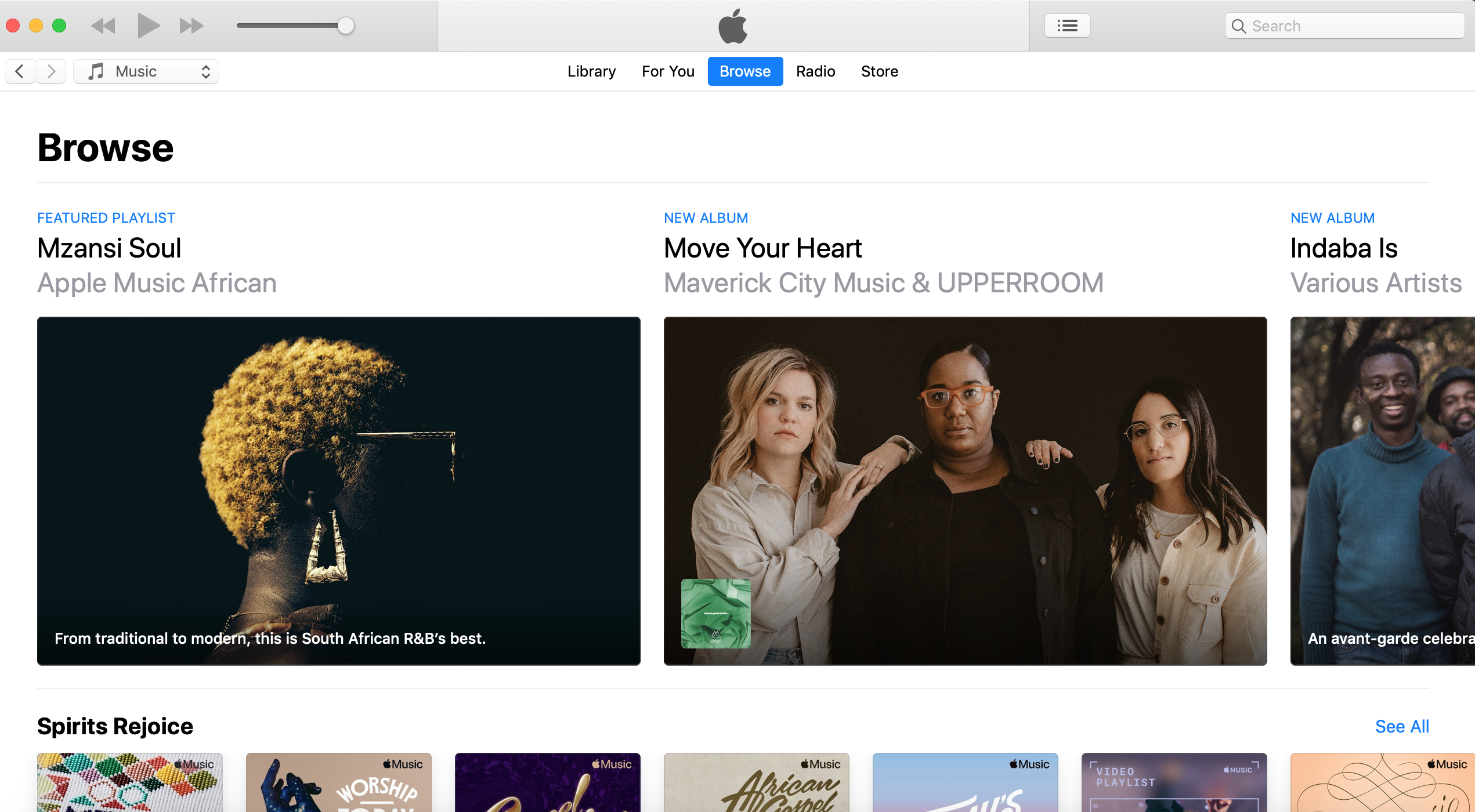 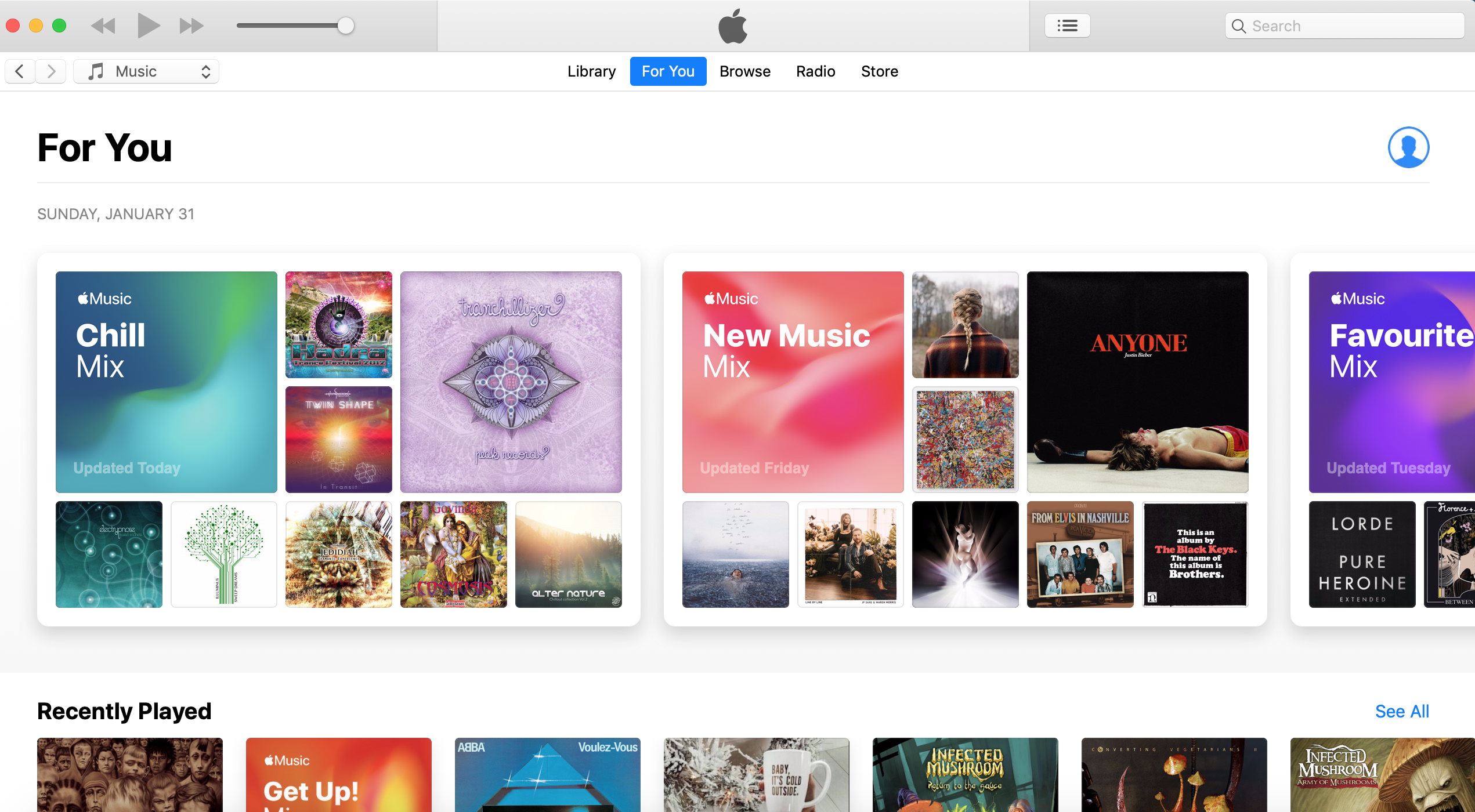 As a Mac user, iTunes comes part and parcel of the equipment. The earlier versions of the Music store weren't as good as the more recent version, but this also hasn't changed too much over the years, except for the offering.

Launched circa 2003 when the iPod was still also the rage. The iTunes offering evolved from a backup & music purchasing software to a monthly subscription service including backups, music, podcasts, video and movies. In 2011 their "match" function was a huge hit and also another life-changing service. You could upload & digitise your CD collection into your iTunes library. iTunes Match would then find the "album cover" and make things look really pretty and easy to find and select - similar to the good old Musica CD browsing days.

Offering: I quite enjoy iTunes. The music match has somewhat evolved to use Ai and now expands and suggests music to you based on what you frequently listen to. This doesn't always work that well, especially if you're just trying to quickly listen to something out of curiosity, but it might not necessarily be your cup of tea. I still love having my library at hand to open when I'm working and have music playing in the background without much fuss.

iTunes is also available on iPhones and your library syncs across devices. Sadly I recently moved to Android, and even though iTunes is available on the Play store (and for Windows), a part of me feels that is a bit of a sacrilege to do. 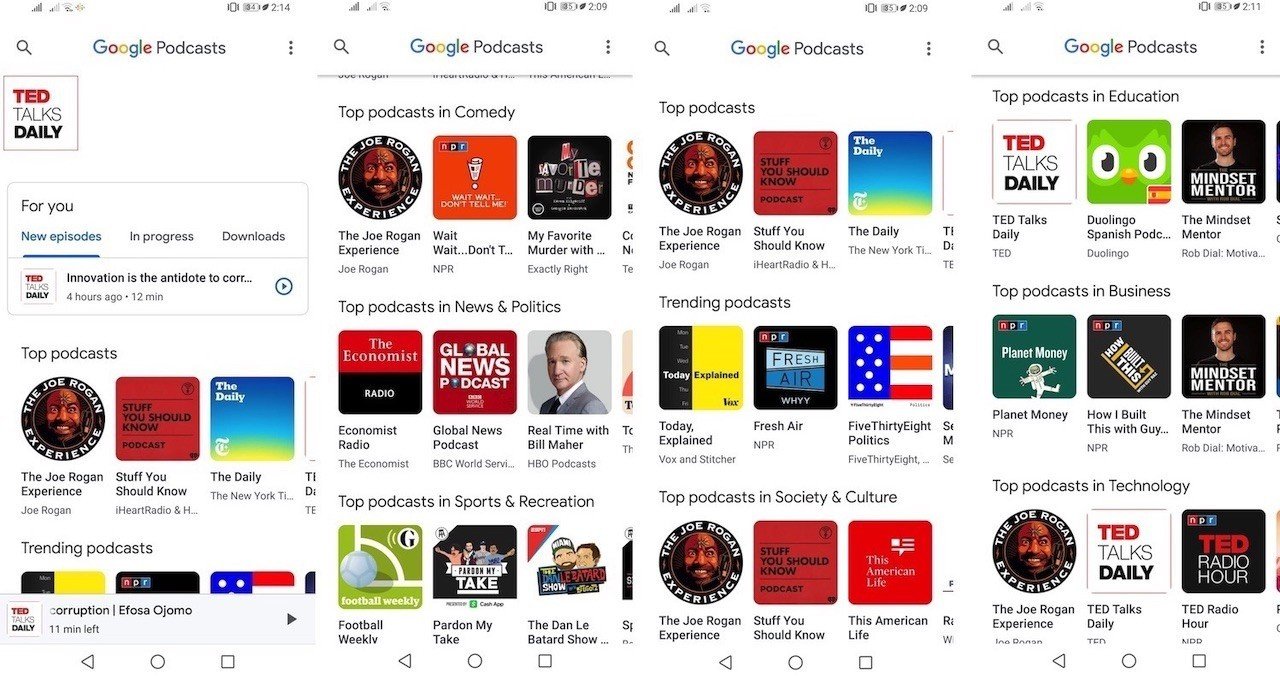 Google did have a standalone music service called Google Music, but recently it streamlined this service to integrate into YouTube Music.

Launched circa 2011 and merged with YouTube in August 2020. There are now two separate offerings one for music on YouTube Music and one for podcasts on Google Podcast, available on Play store. 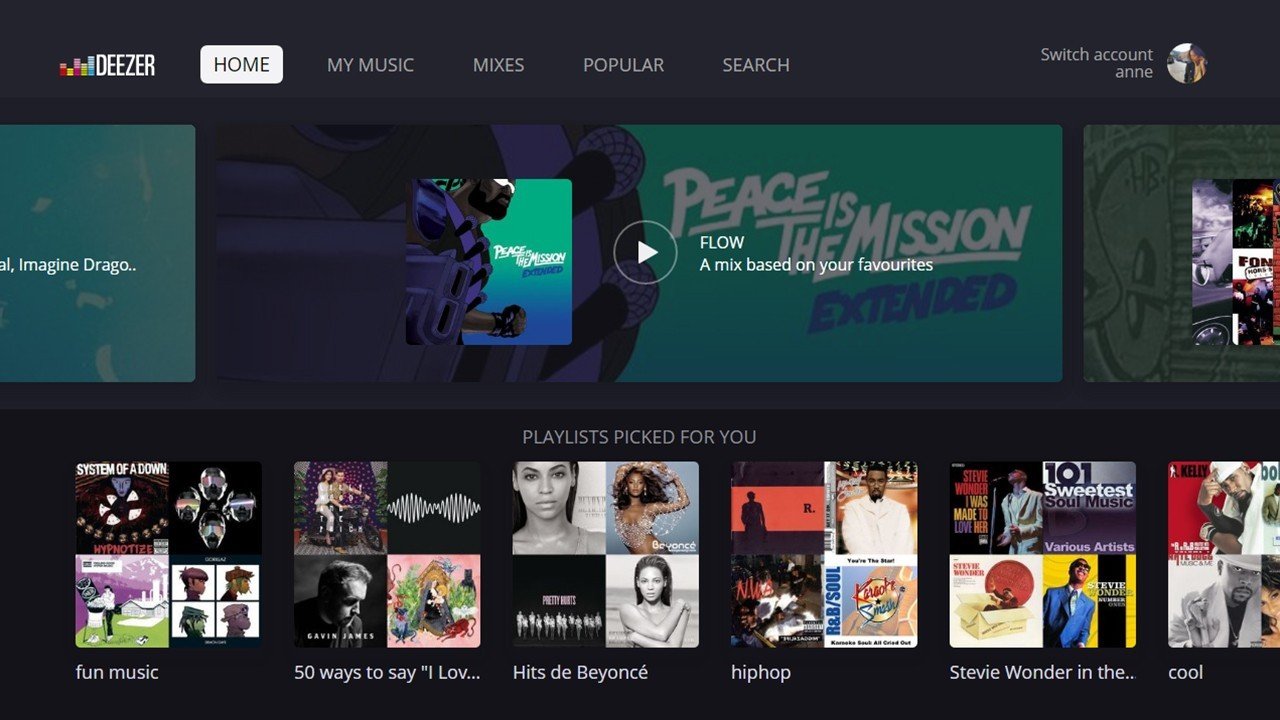 Deezer has grown massively over the years. Originally starting out as only offering hits from large music labels with an emphasis on French (as that is where it originates), it now offers pretty much a worldwide offering with over 56 million tracks to choose from.

Range: The music range has greatly extended over the years, and you can find a pretty solid track offering.

Offering: Strictly music and podcasts. There is no mixing up what these guys offer. Cross device syncing and of course offline listening. You can create and share playlists, curate collections and even import some of your favourites if you can't find it on Deezer. What is quite cool is that it can also show you lyrics for the songs you're listening to. A prime karaoke companion. 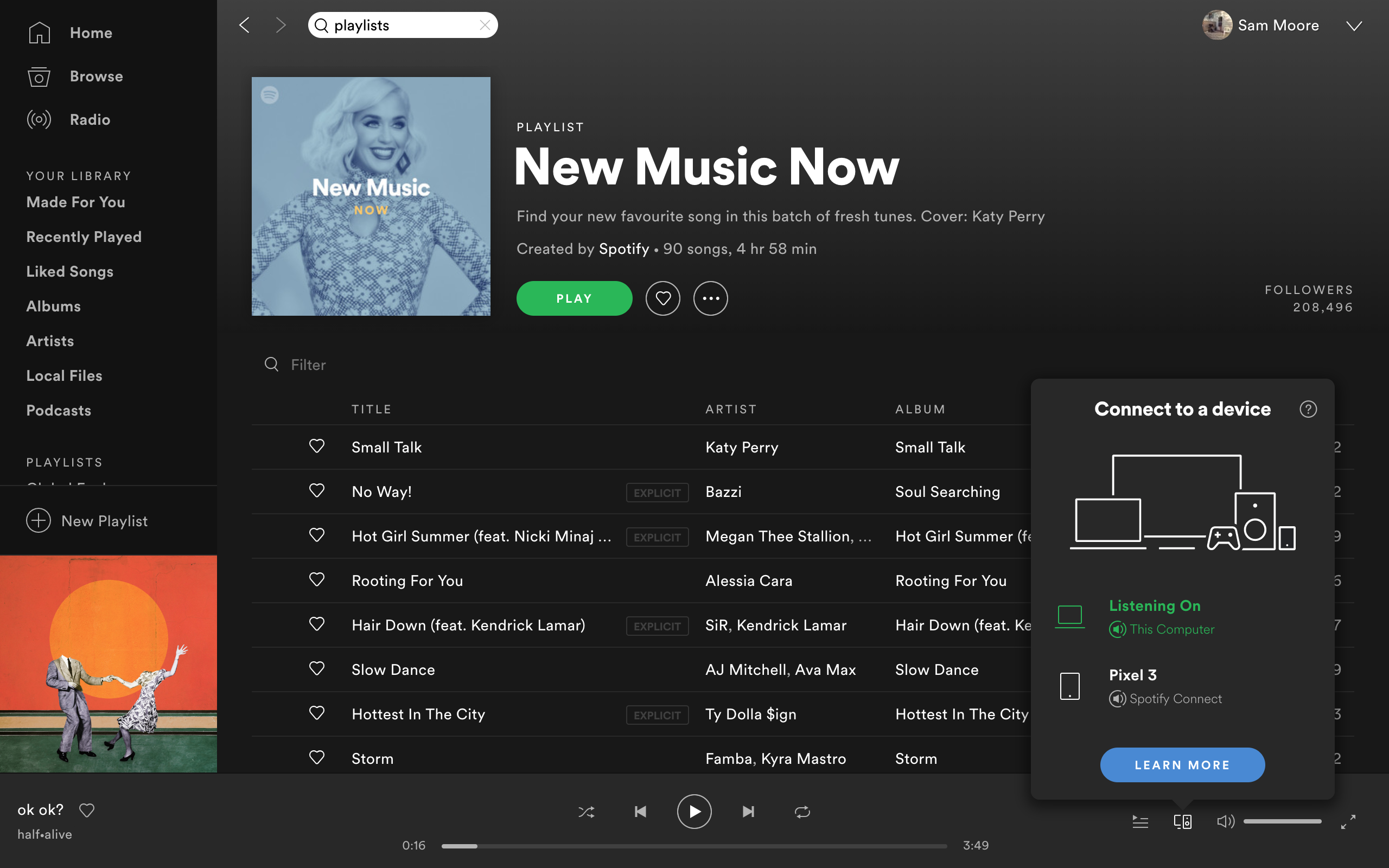 Spotify and Deezer are really quite similar in offering, except that Spotify is a little more strict on its usage.

Launched circa 2008 which makes Spotify the youngest of the streaming services featured in this article. Although it was founded in 2006, it only officially launched in 2008 as a service.

Range: Claims to have "millions of songs and podcasts".

Offering: Although the range offers "millions of songs and podcasts" as quoted from Spotify, the app comes with quite a few restrictions.

There are ads on the free version, you can't download to play offline, there are track limitations and also you are limited with the number of times you can skip tracks.

Most of the streaming services are pretty similar in their offering and price, except for YouTube which is slightly higher. All have a slick "grid-library" style, all have Ai that learns from your behaviour (some better than others), all sync across devices, and also offer download or "listen offline" functionality. So really it just comes down to personal preference.

Music Streaming For Everyone & Every Budget.

The whole family can easily enjoy high quality continuous music streaming with an entry-level uncapped fibre connection of 10Mbps connection from any of the leading ISPs like Openserve, Vumatel or Frogfoot.

Compared to, for example, video streaming, the amount of bandwidth required is really minuscule. Just note: I still would not stream music for long periods of time over a mobile LTE connection. The data costs will definitely get you!

It's great when apps like these actually take note of such costs, and Spotify has a nice little support section as to how to configure their app for even less bandwidth usage.