The modern family today needs a few things: Fibre, NetFlix and Airtime ! Having a decent internet connection and a means to distribute that fast fibre connection inside the home is definitely a requirement to keep everyone happy.

Picking a premium class router so everyone and everything in your house can easily be connected to the internet relatively hasslefree is never a wasted exercise or money.

D-Link has been a trusted name as a manufacturer of routers and other network devices for many years now. The EXO class (or label) is their more "premium" range of home and office network devices.

They look a little nicer and perform a lot better than your everyday router. Especially that freebie router you are borrowing from your current Fibre or LTE ISP. 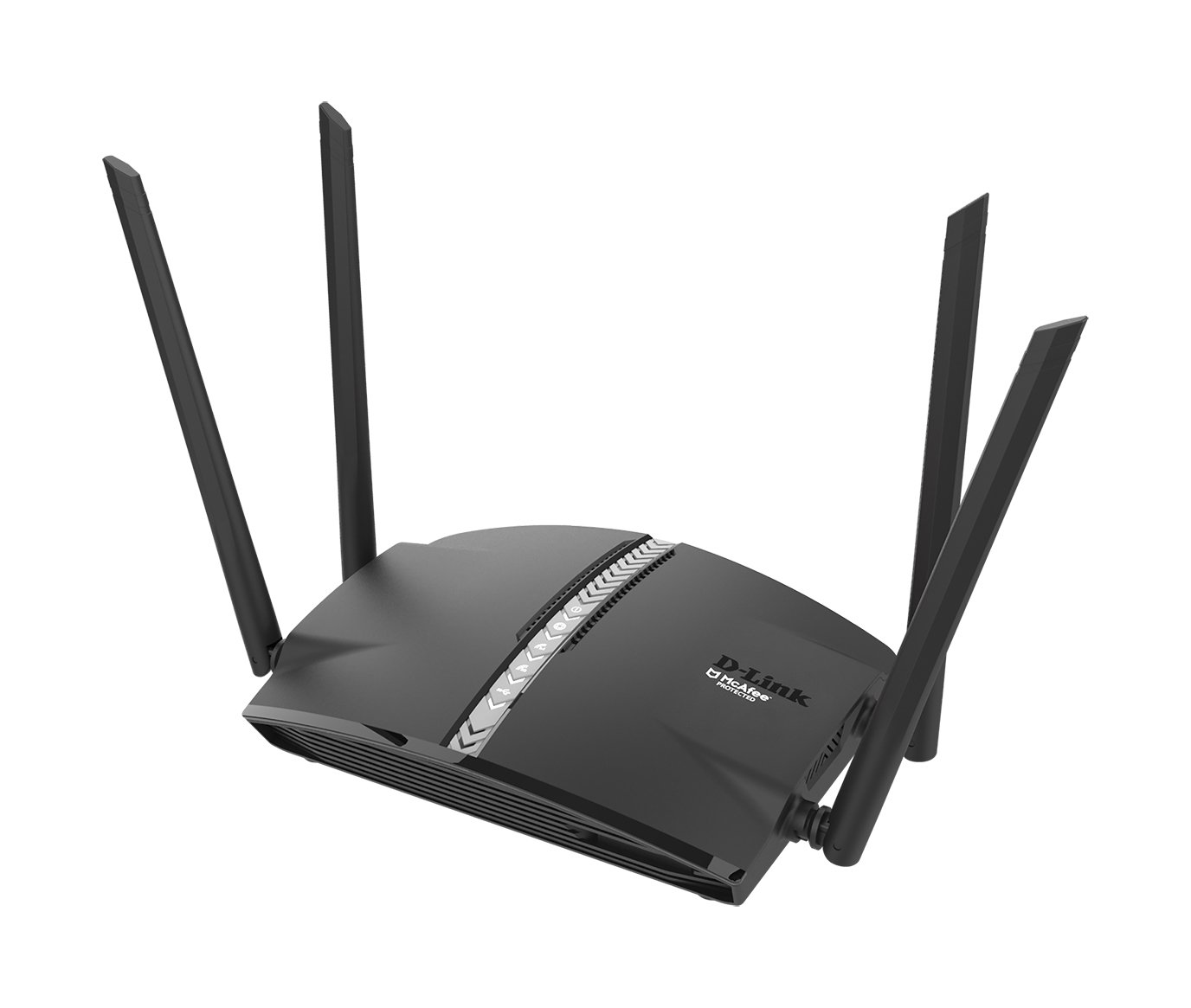 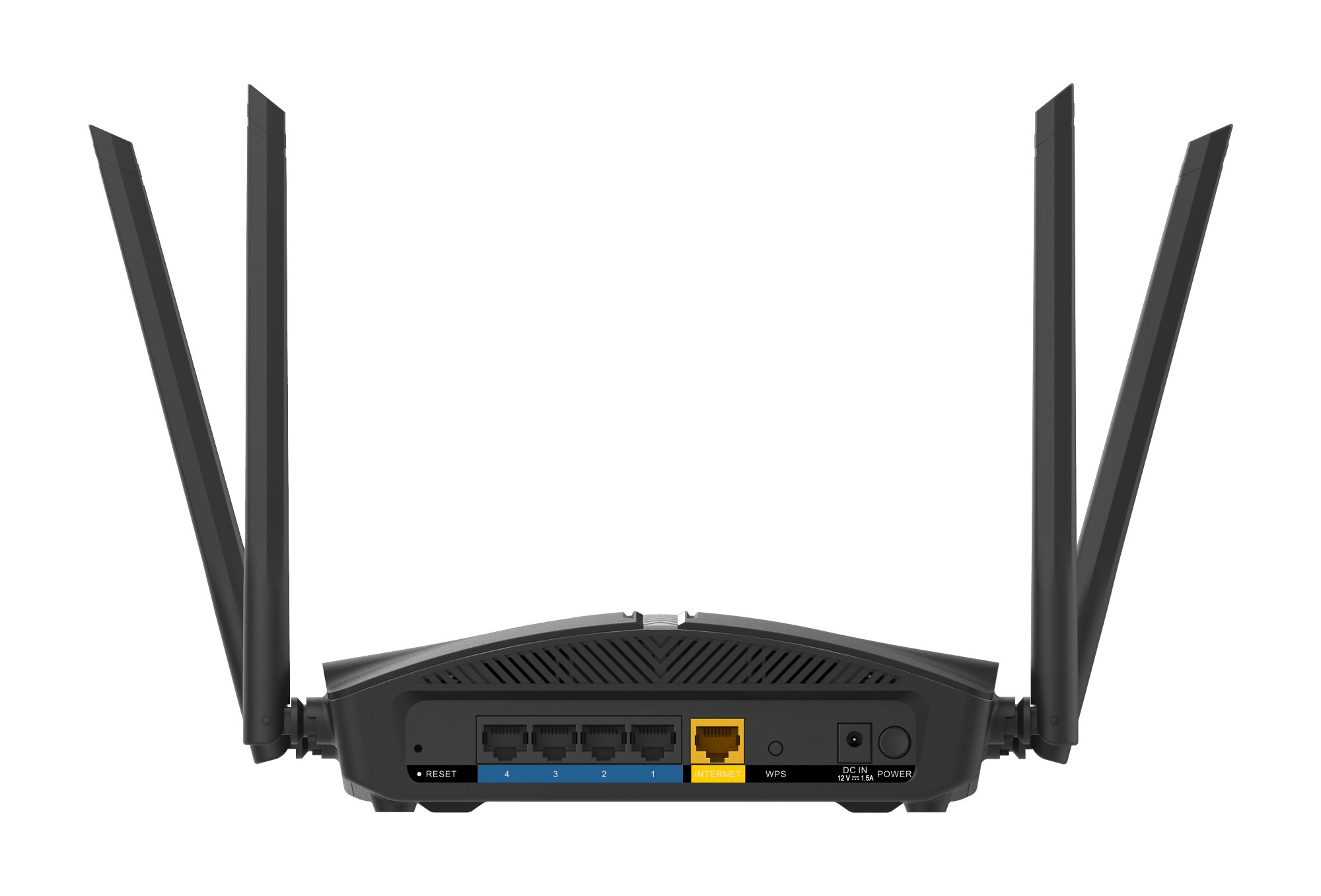 'Mesh'. It's a term and a technology you will keep seeing more of in the future.

You can think of a mesh-router or 'mesh router kit' as a better version of the traditional Wi-Fi extender.

I'm sure many of you might have had a hit or a miss experience with Wi-Fi extenders over the years. From poor quality to spotty performance or constant manual switching - if you pick an el cheapo Wi-Fi Extender, you are not going to have a very good time.

WI-Fi Repeaters: (a.k.a Extenders) simply "rebroadcast" your Wi-Fi signal. It is not very intelligent about it and you will see a new SSID (Wi-Fi Network Name) show up, which you can connect to, should you wish to make use of the "extended coverage" - usually in the form of "MyNetWorkName-EXT".

A Mesh network is much more seamless and intelligent about solving your coverage problems.

Multiple devices or nodes as they are called, are placed around the house to better your coverage and together they form one mesh network.

Your client devices (laptop, phone or TV) will now seamlessly switch to the closest one (node), and there will only be one "Network Name(SSID)" broadcasted. From your phone's point of view there is only one network-device and network name.

Mesh routers are packaged and designed to streamline the whole "Extend Your Coverage" scenario. Because the mesh nodes are specially designed to work with the routers from the ground up, the experience and performance is just so much better.

The first generation of mesh router kits like "Google Mesh Wi-Fi '' gave you three little boxes to place across the house, those work great, but can be very expensive. (Around R6,000 for a kit of three units.)

The modern trend is to have a premium router like the D-Link EXO DIR-1360, but build in some mesh capabilities and design specific extenders (mesh nodes) to work with it.

Thus you can either use this router with or without its extender part, keeping the cost down.

Routers are slowly becoming less of an eyesore, and I can see and appreciate D-Link trying to make it look a little nicer than just your average "Wi-Fi-router".

The unit is a little more rounded and polished and looks a bit like the small alien creature with the long legs (facehugger) - from the movie Alien - according to the girlfriend.

There are 4 antennas and a few chevron shaped LED lights to give you feedback as to your router's status. 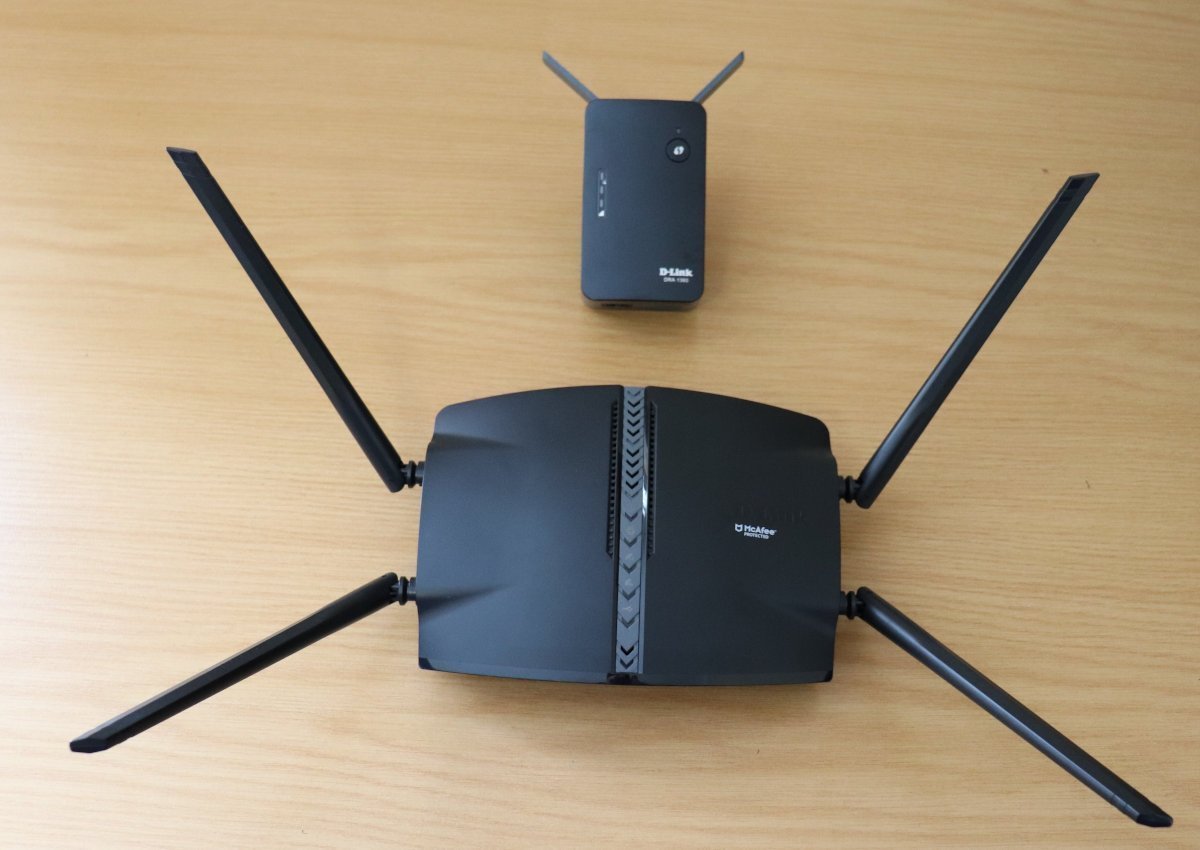 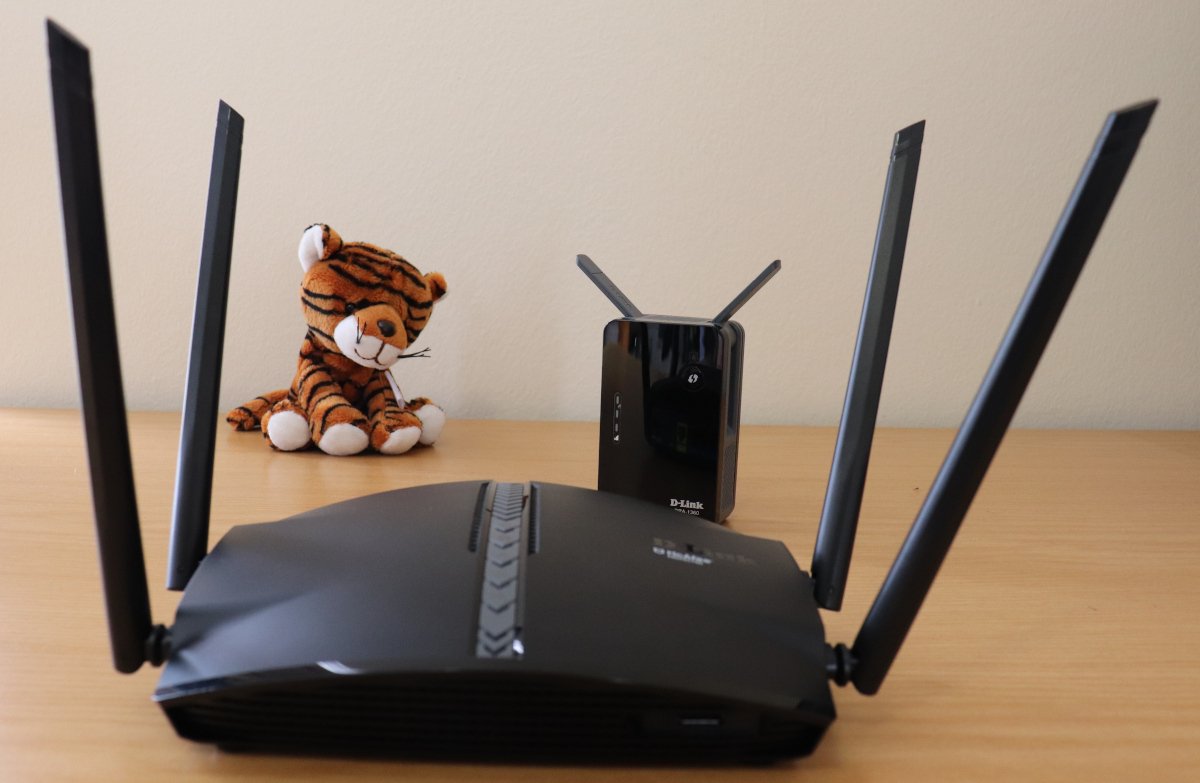 This little powerhouse of a router is the "entry level" of D-Link' EXO class routers, and even so, it really packs a punch as your house's central means of internet access.

It's a dual band (2.4Ghz and 5Ghz) router with fantastic coverage and the option to pair it with one of the mesh extenders like the DRA-1360.

The feature table is below and the product page is here but some things to note about this router is as follows:

Dual Core Processor: Yes, your Wi-Fi router these days is more computer like than you think. Having more processing power in your router is always a plus. It will help processing the packets faster and allow for more intelligent features.

SmartBeam: Instead of your router just radiating the signal (omnidirectional) in a doughnut like shape, it tries to create a much more targeted signal for your device.

"Smart Beam - an intelligent algorithm to detect where that device is and where it's moving in order to send a focused wireless signal directly to it. "

Band Steering: As we mentioned a few times in the past, the 2.4Ghz is very congested and travels further than it's 5Ghz counterpart, which also explains why your neighbours 2.4Ghz signal can interfere with your network.

The routers around your neighborhood constantly try to find the best "channel" (least amount of other people) to use for your network, but sometimes it's better to pick a less congested band like the 5Ghz band.

With the D-Link Band Steering it will detect whether or not the wireless client is dual-band capable, and if it is, it will push the client to connect to the less congested 5GHz network. That sounds like a small feature, but I think it's super helpful to remove this decision from the client or grandparents. Most users don't want to or need to know about the frequency band of their Wi-Fi.

MU-MIMO: (Multi-user, multiple-input, multiple-output) Is really helpful to combat congestion. For examle if you have a spouse and 3 teeangers on the same network, then you better have a router with MU-MIMO capability. This allows the router to better communicate with the connected devices simultaneously.

McAfee Built In Protection. I love this feature and I start seeing it more and more on the routers we test. AntiVirus at the router level allows all the connected clients to be protected. It's free and comes with a 5 year free plan on this device.

Remember that dual-core processor we mentioned earlier? This is exactly the type of extra feature that can make use of it.

Auto Software Update: This option allows the router to always update to the latest software (firmware) for the router automatically.

The reason for updates, just like your PC is to stay ahead of any security issues or new features. I wish every router came with this option !

This router comes with the ability to seamlessly integrate with one of D-Link's Mesh Extender devices.

We paired it with the DRA-1360 which is also based on the AC1300 Wi-Fi standard, just like the router itself.

This extender will work wonders for those dead spots in your house, but what we found is that in some cases simply by upgrading to a more intelligent router such as this one, might already solve some of your connection stability issues. If I had to guess I'd say it's because of the SmartBeam technology.

I do like the "signal strength" indicator on the extender, it helps you to evaluate different placement options inside of your house. 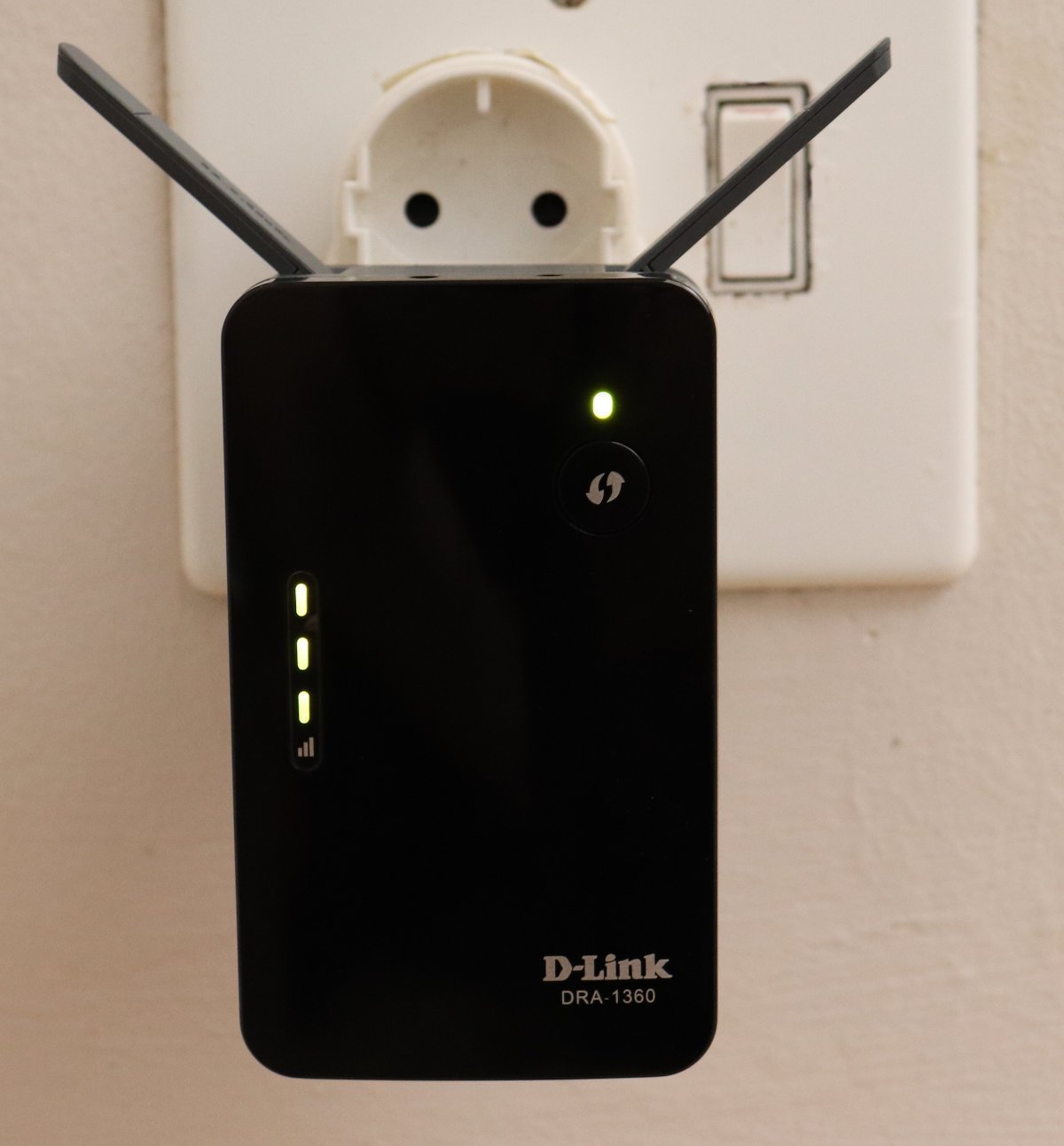 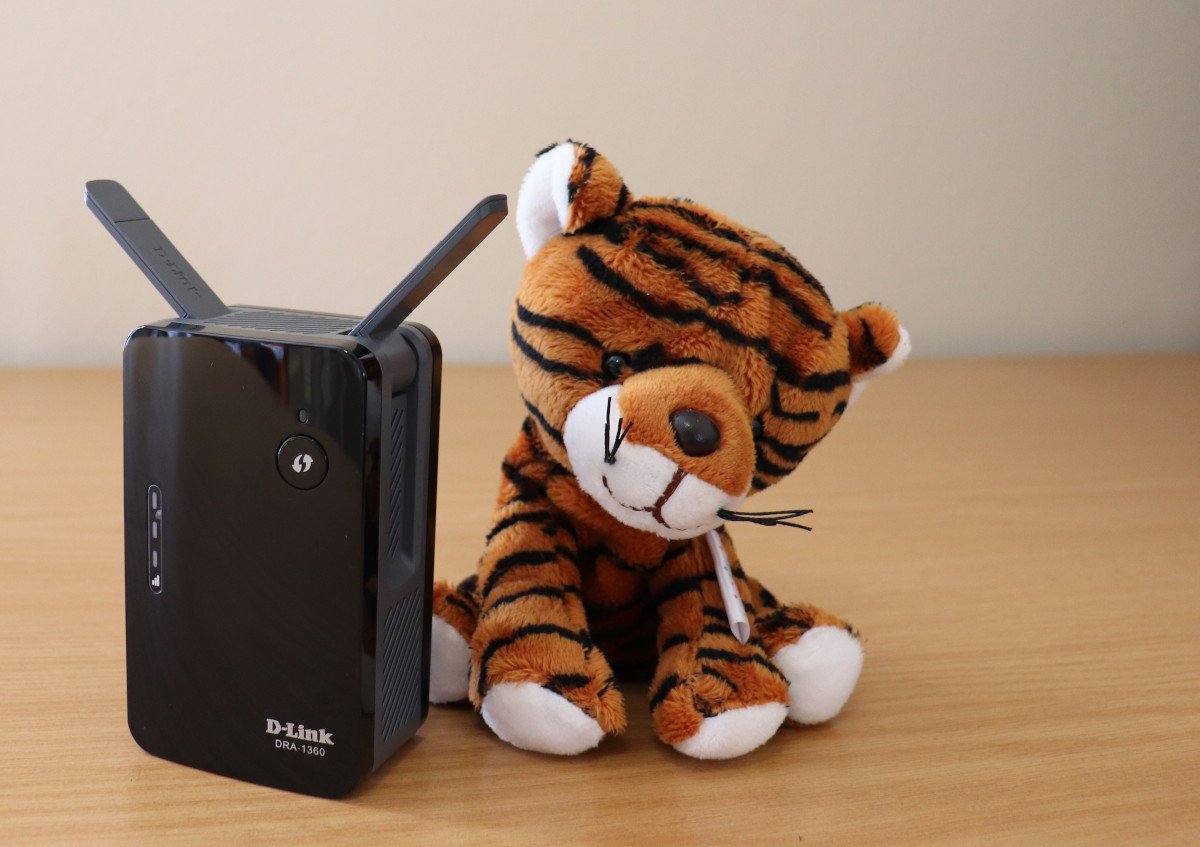 We unboxed the router and plugged in everything we had a wire for; which in our case was the power supply and the ethernet cable from our fibre ONT device for Openserve.

The web based wizard works really well and it's really simple and short to set up your internet and Wi-Fi network.

To set up the mesh node, the app (see comment below) has a very thorough (and we might add, slow) wizard to help you set up the node. The easiest way we have found to make the node join your network is to plug in an ethernet cable (provided) from your router and into the mesh node and wait 3-5 min for all the lights to turn green. You will also notice it come up on the web interface. Much faster and easier than the mobile app.

There is an app for both Android and Apple OS. I initially first tried it on my Android phone and, although the app itself was working, it was a bit frustrating. Trying to set up the extender with the app-wizard was a no-go! It just never turned green or got "picked" by the app.

In the end I had to ask my girlfriend to download the app on her Apple device. It went a bit smoother, but was still a bit of trial and error with lots of waiting between steps. If you are having setup issues just skip the app all together and use the web interface and cable.

ASUS is also fond of pushing their app, but I've never liked the ASUS router app either. It always seems a little bit buggy too. 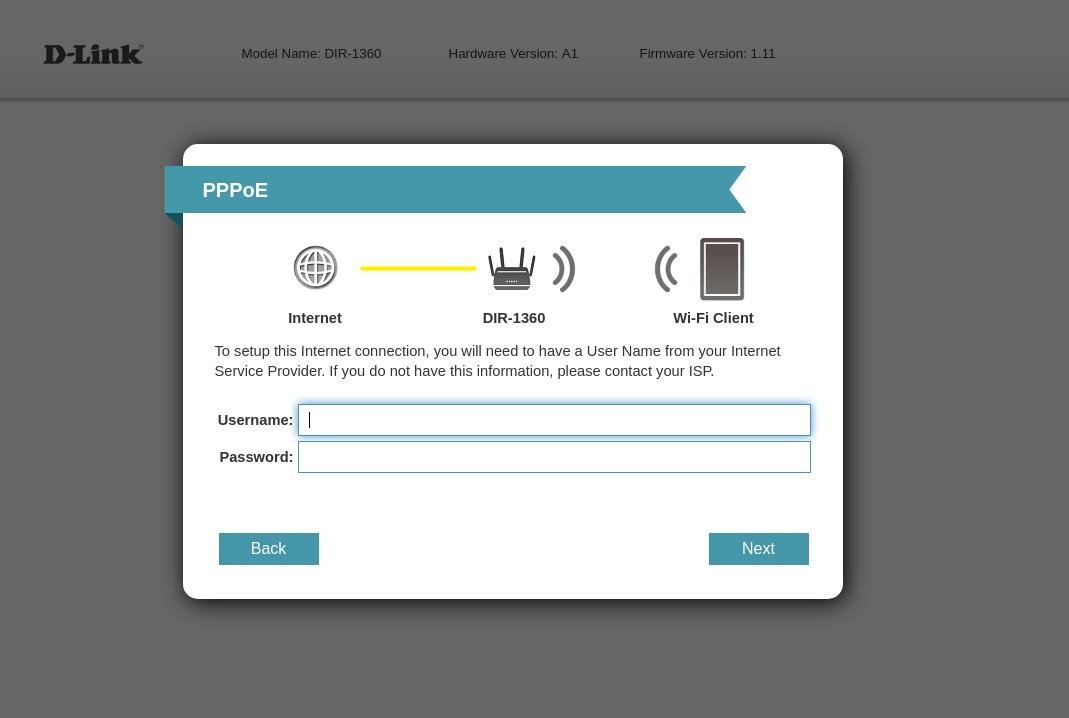 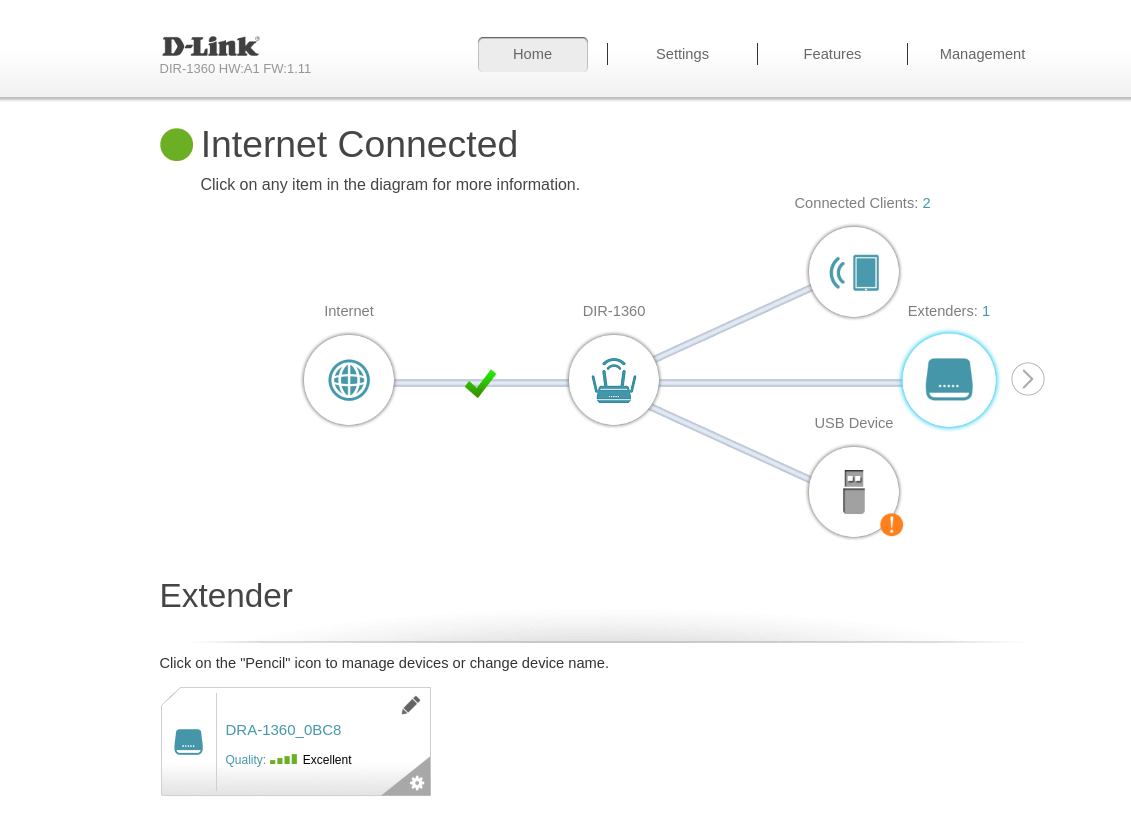 Everything Up And Running - Notice The Mesh Node (Extender 1) 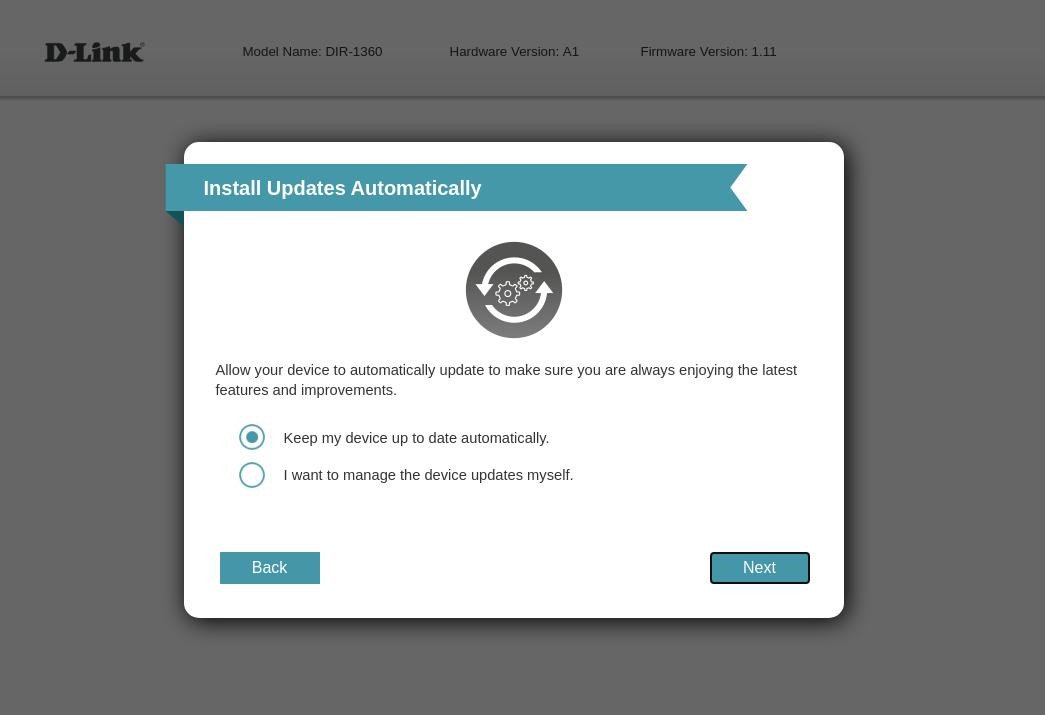 In a nutshell: Very good and very fast !

Once everything is up and running it will disappear into the background as a good router should! Ask yourself, how many times a day do you have to "fiddle" with your fridge to make it work. The answer should be zero. That was our experience with the D-Link DIR-1360 as well, once we set it up the internet was flawless, fast and very consistent. We forgot it was there!

We did a number of internet speed tests over the week and all were perfect on our 20Mbps connection. The router was definitely not our bottleneck. The speed in the "speed test" is a function of your ISP.

As mentioned earlier, the network ports including the WAN port (where you fibre goes) is 1 Gigabit enabled, thus if you are lucky enough to have a 200Mbps Openserve connection, your Gigabit port won't be wasted. Many home and small office routers (even today) still only come with a 100Mbps WAN port.

Even though it is not explicitly stated, with features like QoS and port forwarding, D-link has made provision for all the gamers as well: With QoS you should be able to prioritize any of your gaming traffic over, for example, the spouse's NetFlix streaming. And the port forwarding will work very well for any console gaming devices like the PlayStation 4 or 5

QuickVPN: It's sort of in the name, but with D-Link DIR-1360 it is very quick and easy to set up your VPN at the router level.

In case you make use of a third party VPN Service, like for example, NordVPN or ExpressVPN you can set up the VPN at the router itself instead of on your computer, which means that everyone connected to the router will be protected by the VPN.

Compared To Your Current Router

You might ask: Why upgrade ? My current router I received from my ISP is working well most of the time… ?" Or maybe you have bought your own trusty router a few years back, should you upgrade ?

That is exactly what we thought. My girlfriend has used a very good middle-of-the-road router for the last few years. When we installed the D-Link DIR-1360 at her house, there wasn't an immediate benefit that we noticed. Only once we took it away did she immediately WhatsApp me to bring back the new router.

Seems it was making a much bigger difference for her connectivity than what we initially realized. Mosty in terms of connection stability and throughput. I think this was a direct result of the Smartbeam technology and some cumulative small lists of other improvements D-link has made over the last several years.

If you compared this to some of the top level gaming routers that cost many times more, this is a real bargain.

The router and the extender are sold separately which I think is clever since not all people will need an extender. This allows D-Link to keep the price of the base unit really reasonable.